A young Greek philosopher wondering about Joulia Strauss: “Who are you?! You are the discourse itself”. 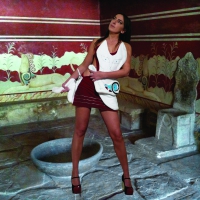 “Inaugurational Performance of the Oldest Ancient Greek Music Fragment in Berlin”, the live contribution to the exhibition, included a song, a talk, which gave an insight into the beauty of structure of the pythagorean machine of love, as well as a minimal dance involving a performance dress sculpture.

The dress was proportioned in a lydian scale and and was part on a complex process of furtherdevelopment of music notation Joulia Strauss conducts together with a philosopher Martin Carlé. The performance dress sculpture was left in the exhibition space as a trace of ethos now lacking dynamics, but reminding of a presence. Next to it, a series of photographs were on display. They executed the operation of shorting with the onlastig discourse on “Aporias of Love”, by beeing the most aporetic embodiments from the book of the same title by Marcus Steinweg. These series celibratively transgress the borders between epistemé und techné, theory and praxis, philosophy and art.

Joulia Strauss experimented applying the theory of the subject: if the romantic love is a fundamentalism of the modernity, then the calligraphic quotations on the body of the subject are its traditional logocentric ornaments…