A stereoscopic camera follows several scenes from the life of the Refugee Strike, Berlin. Sista Mimi, a musician and one of the most significant figures of the protest movement, as well as in Berlin in general, explains, how Africa was devided like a piece of cake and calls her fellow refugees „a bill“, which now came. Meanwhile, due to miserable conditions of existence of refugees, Mimi has passed away.

The streets of Berlin are vitalised by demonstrations, full of novel celebrative revolutionary energy.

Possibly, some people remember the bus to the Blockupy in Frankfurt. Refugee Strike was subjected to perfidious police control. Five hours in the bus, translations into five languages. Those who would like to join the protests, must show there documents. In case there is a deportation order, it must be executed. Brutal rassist police violence, the corral, all beautifully documented.

One of the episodes, a statement by Mimi and Refugee Song by Antinational Embassy:

The video sculpture is a dynamic anamorphous monument to Chelsea Manning—the innocent, highly intelligent manchild. It has been conceived while Manning, back then, Bradley, was tortured with solitary confinement, no-touch psychic disturbance and subjected to forced nudity—for debriefing the world on the Vietnam-esque activities of the US in Iraq. While the media have been distorting the political meaning of Bradley Manning’ audacious deed, the technique of anamorphosis has reassembled the image of Manning and her aim of leaking the documents on war crime by letting her speak:

Video version of the sculpture:

After the cultural revolution the country is ruled by artists. Key positions are occupied by protagonists of the dynamic are scene of Athens. In einem Sci-Fi scenario, but in documentary style, actual processes in Greece are unveiled.

The dramaturgy is replaces by a “Dynamic Helones Structure”, turtle shell sections cover separated scenes. 22 year old prime minister and actor is interviewed at the place that has become a senctuary of our time, where a harmless teenager was shot by a policeman in december 2008. Alexandros Grigoropoulos street is the spot from which the initial insurrection against the situation in Greece and in Europe has sparked.

The video navigates through a fairy Landscape compiled out of views of Delphi. Listening to the song reconstructed after Ancient fragments found in the area, the viewer encounters mathematical operation animals proportioned after “pythagorean” enharmonic tunes.

Animals of this sculptural system appear as extatic visions differentiated by specifics of their tunes and geographical positions. The song culminates in a dance of the so-called “All-embracing Dorian Sum-Cat” along the tones of melody which unveals its specific character. 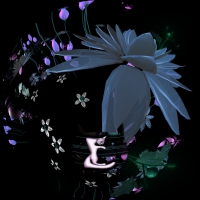 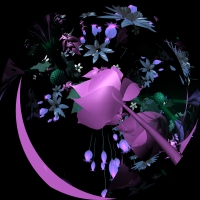 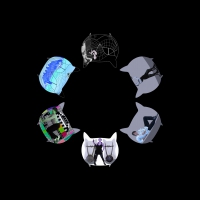 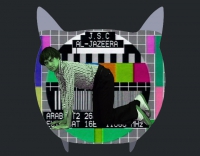 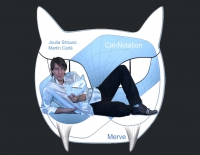 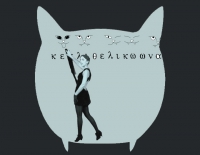 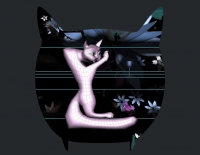 The video contains theoretical remarks on „Cat-Notation“, in collaboration with Martin Carlé, a transponing and furtherdevelopment of an ancient „Greek“ musical system into the „synthetic sculpture“. The signs of Ancient Greek music notation are replaced by a set of expressive cat faces and are transferred into a 3d environment. With the help of modern simulation technology, the interval ratios of different ancient modes of music have been reconstructed and used as proportions for Synthetic Sculptures. The 3d sculptures embody mathematical operation animals. The limbs of there bodies move exactly according to the melodic progression of the Ancient Greek music fragments. For the first time in the history of music notation, the ethical character of a key gets exposed. The Cat-Notation liberates the essence of ancient Greek music from the prison of representation and reveals the miracle of modulation to us as we experience the alternation of expressively differentiated scales within the same melody through the morphing of one animals into the other. They show how the reliable laws of beauty that exist in the concurrence of music, mathematics and time do now reincarnate in sculpture.

“TK News – 3″, 2007
In collaboration with Moritz Mattern and Martin Carlé 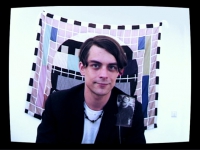 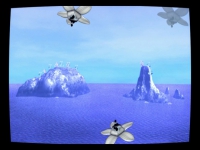 Against the background of a textile-manufactured test card appears Moritz Mattern, who reports that, contrary to Adorno’s belief, our culture did not emerge from the negligence of desire. The following sequence shows a flowery simulation of the siren’s islands at gulf of Positano. The 3D ship of Odysseus, with a time- and wave-damaged front figure in the form of Friedrich Kittler, bears a projection on its sails: Martin Carlé explains astonishing relations between sirens and harmony. This is followed by the Tetraktys Zoion – a neo-Pythagorean sketch for synthetic animal sculptures.

Weather report: “Germany becomes Greece.” Joulia Strauss introduces a just-completed reconstruction of an ancient Greek lyre, and sings the First Delphic Hymn to Apollo whilst accompanying herself on the instrument. The hymn was written down by Athenaios in the 2nd century before our time, to show the beauty of ancient Greek music to the barbarian Romans. Originally, the work was rendered as a prequiem during archaic sacrifice rituals.

The core of TK News 3 is a 3D reconstruction of a scientific expedition of Humboldt University scientists: Martin Carlé, Friedrich Kittler and Christian von Borries. Supported by Peter Weibel (ZKM Center for Arts and Media, Karlsruhe), they visited the Siren Islands and conducted experiments relating to the spreading of sound. It was proven that the acoustical conditions of the site were crucial for the Odyssey’s central scene and that the sirens were indeed a matter of real experience. 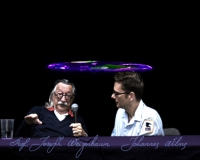 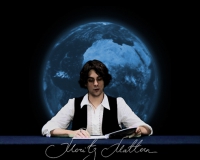 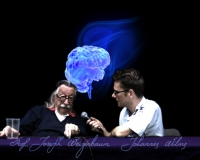 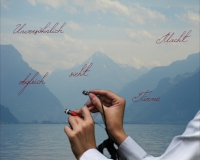 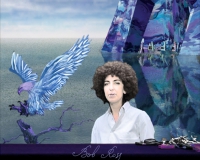 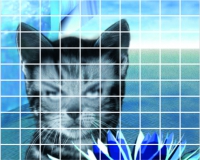 Scientific arguments that concern Earth flattening in a discussion between Johannes Wilms and pioneering Artificial Intelligence researcher Prof. Joseph Weizenbaum are didactically followed by Bob Ross, who is dramatized by Strauss herself. The American master of the 3-cent landscape painting, and hero of many a proper housewife, is not dead. Rather, he exists as a member of the Euro-Continental Vampire Club, residing in Berlin-Mitte and revealing his secret cultural techniques via rehabilitation of abused animals for the representation of power. In the weather forecast that follows, a new romantic poem is written across the screen with the holy 3D computer fire of forecaster Strauss’ hand.

Numberous 3D animated portraits of technologically and psychoanalytically minded scientists as well as their dead forebears Sigmund Freud, Jacques Lacan, Marshall McLuhan, André Leroi-Gourhan, and others, gather in the nothingness of “Behindthescreenland”. This meeting is called “MedienSpiritismus, VideoKabinet”.